One of our best little helpers! 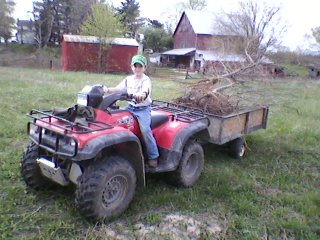 Friday we were out on the pasture cleaning up some scrub brush that had been cut down.  One of my sons drove the 4-wheeler for me as I loaded the trailer.  What a blessing to work with your children!  I love spending time with each of our children, teaching and learning things together like: seeing God's hand in nature, developing a good work ethic or watching the animals enjoy a sunny day.  Experts told us years ago that children need "quality not quantity time" with their parents.  I disagree with this; our children need both and Lots of it!  Our children need US more than anything else to help and train them into becoming healthy, well-balanced citizens; people who live out character in all they do, who know the value and shortness of life, and who understand the importance of having healthy relationships.  The Bible tells us "Children are an heritage of the Lord: and the fruit of the womb is his reward" Ps. 127:3  What a blessing our children are.  Thank you Lord for each one of them!!!
Posted by Mark at 9:34 PM No comments:

Grass-fed beef is better for human health than grain-fed beef in ten different ways, according to the most comprehensive analysis to date. The 2009 study was a joint effort between the USDA and researchers at Clemson University in South Carolina. Compared with grain-fed beef, grass-fed beef was:
S.K. Duckett et al, Journal of Animal Science, (published online) June 2009
Posted by Mark at 8:02 AM No comments:

Two years of production then most dairy cows are turned into hamburger!

The typical dairy cow raised on a conventional confinement dairy farm is injected with hormones to increase milk production. Then after only two year's on the job, she's slaughtered and turned into hamburger because she's either sick, lame, fails to breed, or is a less than stellar producer. The average cull rate in the dairy industry is 30 percent. That means that each year, almost a third of our dairy cows are slaughtered and replaced with new heifers.  Most of these cows go to cattle buyers for large packing companies, and go into your supermarket hamburger, fast food hamburger, or mixed into other supermarket meat products.
A cow that's treated well, spared the hormones, and raised on pasture can be expected to produce milk for ten years or more. The cull rate in a grass-based dairy can be as low as 7 percent. The money that a farmer saves by not having to replace a third of the herd every year helps offset the fact that a cow free of artificial hormones produces less milk. Bossy gets the respect that she deserves and consumers get hormone-free, nutrient-rich milk.
Posted by Mark at 10:47 AM No comments: